Chess gambits are excellent for beginners for many reasons. They help you

Many gambits have traps to help you win early if your opponent is not paying attention. Although these gambits work best at the beginner or club level, they can earn you a victory at higher levels.

The best traps in chess gambits are the ones where your opponents play natural moves and get into trouble. Even if your opponent plays well, all of these gambits will leave you with an equal position.

Two Gambits to Play With White

Despite the name, the Hillbilly Gambit will help you crack the rock-solid Caro-Kann. Caro-Kann players might laugh at the name, but you will soon wipe the smile off their faces with your secret weapon.

Why enter their well-prepared theoretical world when you can draw them onto unfamiliar territory? Go ahead and show your aggressive intentions as early as the second move with 2.Bc4.

The Scotch Game is one of those openings you can keep in your repertoire for your entire chess career. Garry Kasparov did a lot to revive the Scotch game and turn it into a dangerous opening for white.

Like its name, the Hillbilly Gambit is a lot of fun to play against the Caro-Kann. What can be better than ignoring your opponent's plans and giving them a pawn to boot? 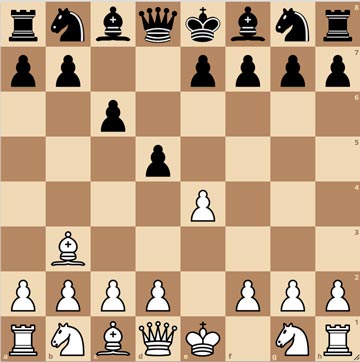 Resist the urge to play the meek 3.exd5, playing into Black's hands. Do not fear bringing your queen out early, either, because this chess gambit is all about attacking f7.

Most of your opponents will meet this chess gambit with 3…dxe4, but some might choose to occupy the center with 3…e5 or develop with 3…Nf6.

Because of the pawn on c6, you can meet 3…e5 with 4.d4 and 4…exd4 5.Qxd4 with quick and easy development. The pawn on c6 prevents Black from attacking your queen with …Nc6.

Against 3…Nf6, you charge ahead with 4.e5 followed up with f4 and natural development. 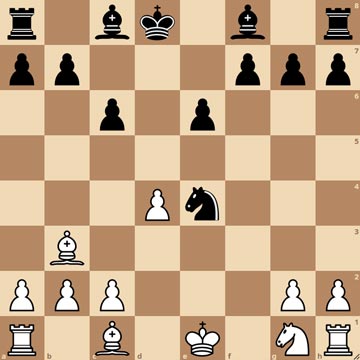 White has plenty of open lines for the minor pieces and rooks, while Black has a bad bishop and has lost the right to castle.

What might come as a surprise is the name of the player with the white pieces in this next game, who played it against an opponent rated 2758 Elo.

Despite being a blitz game, this was a high-quality game, as you would expect from two of the best players in the world.

A Deadly Chess Gambit to Play With White

The Goring Gambit is a chess gambit that arises from the Scotch Opening. The Scotch Opening is an excellent choice for beginners because it follows classical opening principles, and you do not need to know a lot of chess theory.

When you want to spice up your opening, you can safely play the Goring Gambit, knowing you will not end up in anything worse than an equal position. When you feel less adventurous, you can play the Scotch Game.

As in many chess gambits, White sacrifices a pawn in return for open lines to use for an attack and a lead in development. 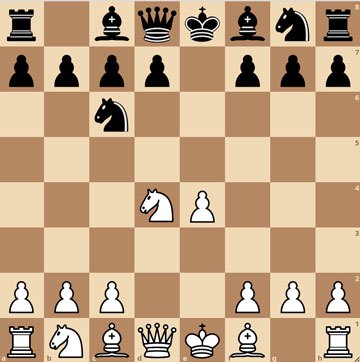 The Goring Gambit starts when White plays 4.c3 instead of recapturing on d4 with the knight. 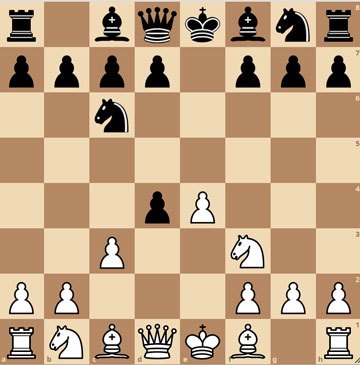 Now Black's most popular moves are to either accept the gambit with 4.dxc3 or decline this chess gambit with 4…d5. When offering material, it is always good to start by seeing what happens if your opponent accepts the offer. 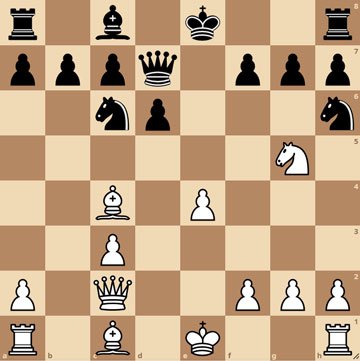 Do not leave your knight on g5 undefended, but an excellent square for White's dark-square bishop is a3. One way to defend the knight and free up your dark-squared bishop is with the f4 pawn advance.

In this position, White has open lines for the bishops and semi-open files for the rooks, while Black will need time to untangle and develop.

Look at how Albert Blees beat his 2400-rated opponent in less than thirty moves from this position.

The Goring Gambit Declined With 4…d5

The most popular way of declining the gambit is with 4…d5. Black counters in the center and develops fast.

After 5.exd5, Black can recapture with the queen because the c3 square is unavailable for the knight. White must first capture the pawn on d4, which gives black a vital tempo to meet Nc3 with …Bb4.

In fact, it isn't uncommon for Black to pin both of White's knights with …Bb4 and …Bg4. 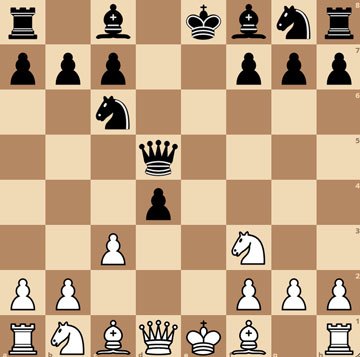 The queen does not fear being in the center as it is difficult for White to attack the black queen. 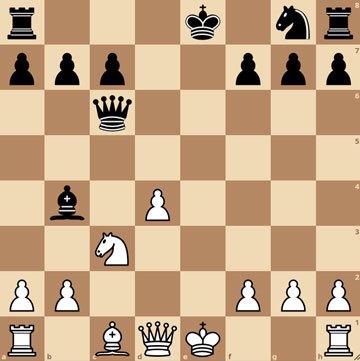 By playing easy-to-remember moves, you reach a safe middlegame position with white, and the pawns on both sides of the board make the bishops slightly stronger than the knights.

Here are three dangerous gambits for black – one against 1.d4 and two against 1.e4. Against 1.d4, the Englund Gambit is an exciting opening.

Against 1.e4, the Icelandic Gambit gives Black good play, and if you prefer 1.e4 e5, the Rousseau Gambit is strong against the Italian Game.

The Englund Gambit is a dangerous chess gambit not many players with white will ever face. 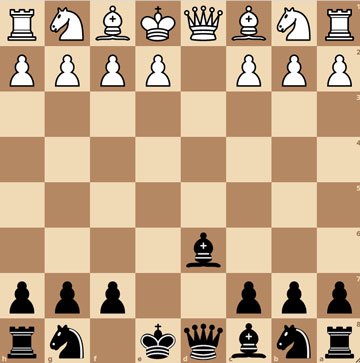 Black has the open d and e-files plus a lead in development. The black king is only two moves from castling, while the white king will need four moves.

Another good strategy for Black is to castle queenside because this place the rook in the same file as the white queen. Then if black ever castles kingside …Bxh2+ leads to a discovered attack on the queen.

Here are two games showing how deadly the Englund Gambit can be for the unsuspecting chess player.

Yes, the level of chess has improved a lot since the 1800s, and modern chess players usually have better defensive skills. Here is a game almost a hundred years later where Black won in only 18 moves!

A good defense against 1.e4 for beginners is the Scandinavian Defense (1…e5). One of the best reasons to play it is that White cannot avoid the opening.

After the usual 2.exd5 instead of recapturing with 2…Qxd5 Black can play 2…Nf6. After 2…Qxd5, the queen comes under attack with Nc3 and loses time moving to safety.

This variation is playable, but sticking to the opening principles is best for beginners. When you play 2…Nf6, you develop a piece, and if White tries to retain the pawn, you get the chance to play an exciting Icelandic Gambit. 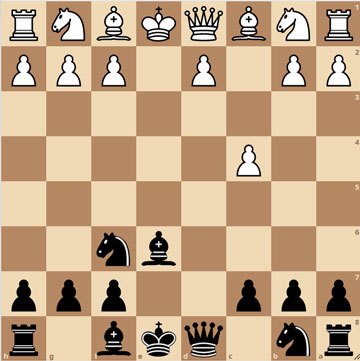 It is clear that Black has a lead in development and two open files in the center. All of White's first four moves are pawn moves, while Black has only made half as many. 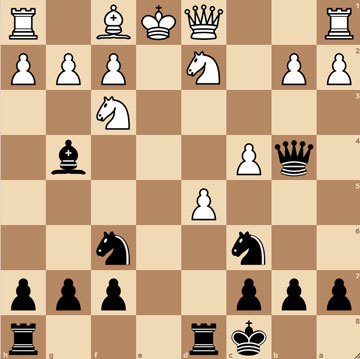 Instead of 10…Bg4, Komodo Dragon suggests the amazing 10…Nxd5 11.cxd5 Bxd5 to open lines against the white king and queen. It won't be long before Black has a winning advantage.

10…Bg4 was good enough for Jonathan Speelman to win against his 2595-Elo-rated opponent.

Beat the Italian Opening With the Rousseau Gambit

The Italian Opening is a trendy choice with 1.e4 players. The Rousseau is an excellent chess gambit to take your opponent into unfamiliar territory.

Rather than let White call the shots, Black counterattacks as early as move 3! 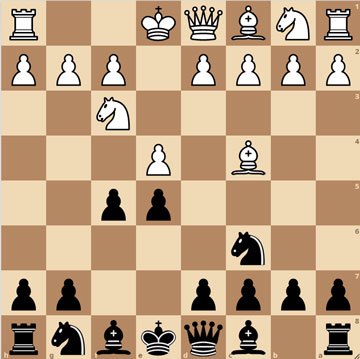 If White accepts the gambit with 4.exf5, avoid the temptation to play 4…e4. This move allows 5.Nd4, and if you capture the knight with 5…Nxd4 White has 6.Qh5+.

Black is in trouble because the pawn on f5 controls g6 and 6…g6 7.fxg6 sets a trap. The natural 7…Nf6 attacking the queen allows g7 when White wins material.

There is no need to risk giving away an advantage when you have the natural and strong 4…d5. 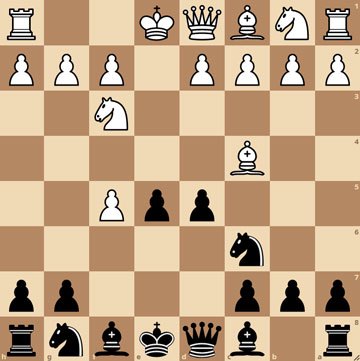 Taking control of the center always serves you well, and Black will soon regain the pawn.

Because d3 is often played in the Italian Opening, it is a natural way for White to decline the gambit. However, Black can use the advanced f-pawn to help in an attack on the kingside.

Pushing the pawn further ahead with …f4 will help close the kingside and can restrict the white pieces while giving the black pieces more space to operate on the kingside.

The first world chess champion Wilhelm Steinitz shows us how you can play against 4.d3.

Chess gambits are an excellent way to inject lots of fun into your opening repertoire. They do not need to be your primary choice, but many of them can certainly be your primary weapon.

However, there are good chess gambits and others that are plain dubious. Fortunately, enough chess gambits offer excellent compensation for the sacrificed material.

The lessons you learn from playing gambits will stay with you throughout your chess career. You will become a fearsome attacking player and know the importance of developing your pieces quickly in chess.

Even after shedding the beginner label and playing stronger players, you will likely find yourself surprised by how many do not prioritize development. Thanks to the experience you gained by playing chess gambits, you will rack up many victories against them. The Most Valuable Skills in Chess
$17.95 The Secrets to Mastering the Chess Opening - EMPIRE CHESS
$27.95

You Can Win With the Sicilian Dragon