Looking for an opening, you can play for many years? Then the Nimzowitsch-Larsen Attack is for you! This chess opening is easy to learn as a beginner but strong enough to challenge players rated 2000 Elo.

Positionally sound with easy-to-learn plans, you can feel confident playing the Nimzowitsch-Larsen Attack after a weekend of opening study.

If you are looking for razor-sharp lines with must-know theory extending until move twenty, this is not the opening for you. However, if you are looking for an opening to take you calmly to good middlegame positions and strategies based upon sound chess principles, then you have found one.

When you hear the names Nimzowitsch and Larsen, you think of strong players from a bygone age. The principles they based their openings on are as valid today as they were in the early 1900s.

Here are three modern games to show you the Nimzowitsch-Larsen Attack is still a viable opening at the highest levels. Nakamura used it in 2021 to defeat Ding Liren.

The Nimzowitsch-Larsen Attack begins with the moves 1.b3 and gets followed with 2.Bb2. The fianchettoed bishop puts pressure on Black’s kingside and the vital e5 square. 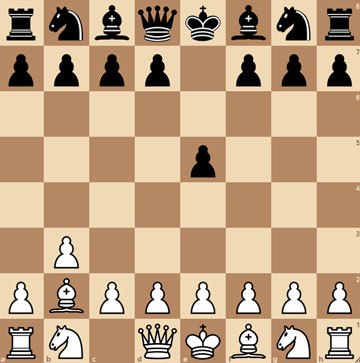 The e5-pawn will come under further attack with f4 and Nf3. Although it is more common for White to castle on the kingside, castling queenside is an option to always keep in mind.

One of the characteristic qualities of the Nimzowitsch-Larsen attack is flexibility; keeping your options open will make it harder for your opponents to launch a successful attack.

As you would expect from Nimzowitsch, this opening is very much a hypermodern opening. Black gets free rein to occupy the center in any way he chooses.

White’s goal is to counterattack the center directly with pawns or indirectly by attacking the black pieces that defend the central pawns or squares.

Simply because we start by developing on the flank instead of the center, it does not mean we cannot engage in direct central contact. In the Nimzowitsch-Larsen Attack, two of White’s main pawn levers are c4 and f4.

In chess, the most successful attacks get directed at your opponent’s weaknesses!

The broad pawn center Black establishes is the first target because White must prove it is a weakness or risk getting overrun. The great hypermodern players of the past did not discount the dangers posed by a central pawn majority.

That is why the center is attacked early in many flank openings with moves like c4 or d4.

This classical pawn center with d5 and e5 is the natural response you will face in many of your games. Because the Nimzowitsch-Larsen Attack is not a common opening, many of your opponents will not be prepared. 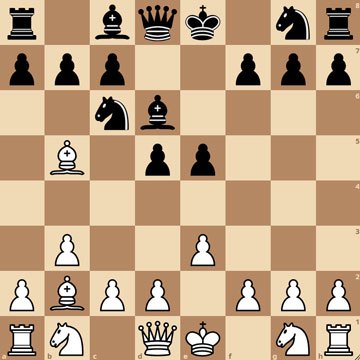 Developing the bishop to b5 is a common strategy. The bishop threatens to create doubled pawns on the c-file and indirectly attacks the e5-pawn by pinning a defender.

White does not always play Bxc6, so make sure you learn when it is better to retreat the bishop!

White logically continues with 5.f4 to increase the attack against the e-5pawn. Now that Black has played …Bd6, the g7-pawn is undefended.

Although Black’s response to 5f4 might appear strange, it does have a purpose – to force White to weaken the kingside with g3. 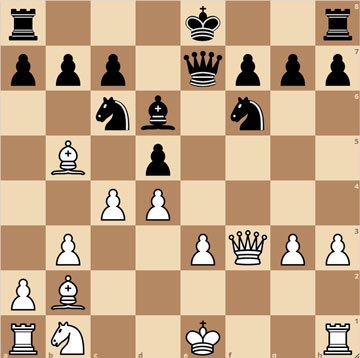 All of White’s moves have been natural, making the Nimzowitsch-Larsen Attack easy to play. There are very few games with 10.fxe5, so you are taking your opponent into unfamiliar territory.

Keep in mind that f2 is an excellent square for the white king because, from f2, the king defends the e3 and g3 pawns. 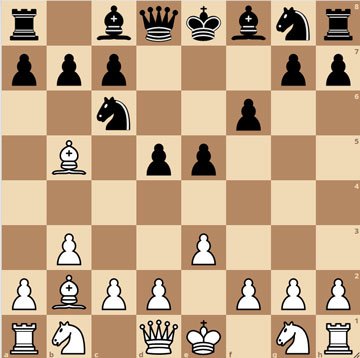 4...f6 is an attempt by Black to ensure the bishop on b2 bites on granite. Although defending e5 with …f6 does blunt the bishop, it weakens the g6 square.

This weakening of g6 can prove costly when black castles short. 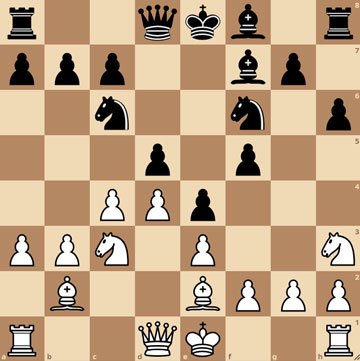 The white knight on h3 is headed for the excellent f4 square when any attempts to drive it away with …g5 will weaken Black’s kingside. The black bishop on f7 has limited options with black pawns on d5, e4, and f5.

Look at this game between 2500 Elo players to see how you can capitalize on White’s positional plusses.

Black Advances in the Center With d5 and c5

Since the e5-pawn comes under an intense attack, it makes sense for Black to hold back on advancing the e-pawn.

In this variation, White’s goal is to take control of the e5-square by eliminating a defender of the square and playing f4 and Nf3. If there is no pawn to attack on e5, then occupying the square is a sensible strategy. 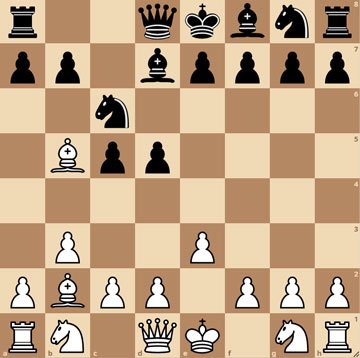 One of the advantages of playing the Nimzowitsch-Larsen Attack is the many standard moves and strategies played by White. 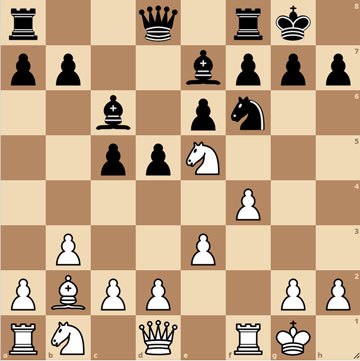 The knight on e5 and the threat of f5 give White attacking options on the kingside. The bishop on b2 is an excellent piece that can support the kingside attack from long range.

One of the many advantages of the Nimzowitsch-Larsen Attack is the lack of weaknesses in White’s position. Yes, it is true that Black does not have any weaknesses, but White can easily create one by capturing on c6.

This weakness can prove a severe handicap in an endgame, as Janturin demonstrates.

In many queen pawn openings …Bf5 is a typical move, and when faced with an unfamiliar opening, it makes sense for Black to seek the familiar. After all, it is logical to assume White will play c4 and d4 at some point.

Although these moves occur in many variations, the c2 and d3 pawns act as a buffer against the bishop.

This is an exciting variation because White castles long and expands on the kingside with g4. You can always count on an exciting game with opposite side castling. 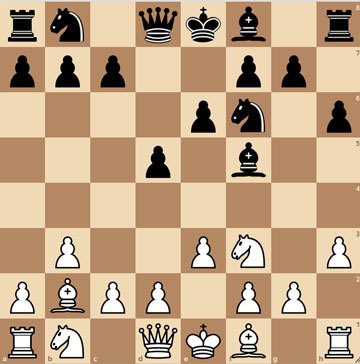 White signals aggressive intentions as early as move five. There can be no doubt that h3 is intended to support the g4-g5 advance. 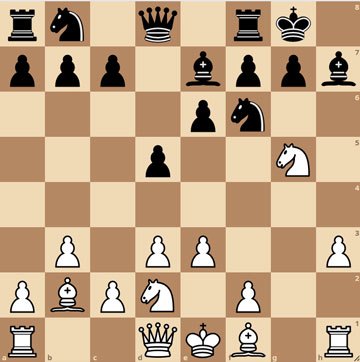 White has the semi-open g-file for an attack on the black king and can bring the queen to support the attack via f3. The queenside will provide a haven for the white king because there are no open or semi-open files for Black to use.

When faced with a kingside fianchetto defense, the Nimzowitsch-Larsen Attack can easily transform to a Reti Opening or a more conventional d4 opening. By starting with 1.b3, you eliminate the need to learn a lot of theory and limit Black’s responses. 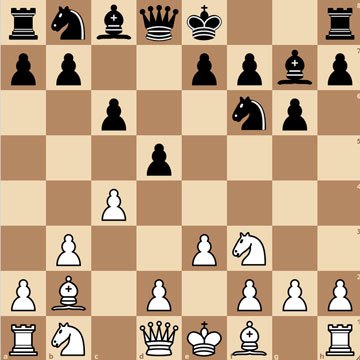 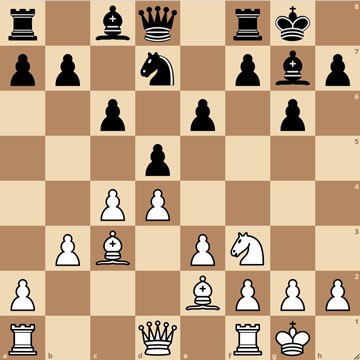 Black has a perfectly playable position, but White has the better light-squared bishop. Playing against the bad bishop on c8 is a perfectly sound strategy for White.

By studying master games with this or similar positions, you will learn how to play the position with White. When studying games, look at the strategies that worked for the other side so that you will know what plans to stop.

The Nimzowitsch-Larsen Attack is an excellent choice if you are looking for a position free of weaknesses. In many variations, you will create weaknesses in your opponent’s position.

Despite its positional nature, there are opportunities to play attacking chess and an exchange sacrifice as well. There is enough attacking potential in the Nimzowitsch-Larsen Attack to attract GM Hikaru Nakamura, known for his attacking chess.

One of the most attractive features of the Nimzowitsch-Larsen Attack is that you can play it your entire chess career. There is not a lot of theory to learn, and understanding the plans against the different defenses Black can choose, will help you find the right moves when needed.

Choosing the Nimzowitsch-Larsen Attack as your main opening will give you a safe opening with bite. Choosing the Perfect Chess Clock for You

Buying a Chess Set Made Easy