SKU
MENWHRM50-P
(0) Be the first to write a review
The House of Staunton is proud to offer the Herman Steiner Commemorative Series Chess Pieces. It features a 5.0" King with a 2.0" diameter base. The Chess pieces are hand carved by our master artisans and crafted out of the finest woods. The Chess pieces are heavily weighted with English Leather basepads stamped with Frank Camaratta Signature under the King, luxurious billiard cloth base pads under the other pieces and a beautiful finish

The House of Staunton is proud to offer the Herman Steiner Commemorative Series Chess Pieces. It features a 5.0" King with a 2.0" diameter base. The Chess pieces are hand carved by our master artisans and crafted out of the finest woods. The Chess pieces are heavily weighted with English Leather basepads stamped with Frank Camaratta Signature under the King, luxurious billiard cloth base pads under the other pieces and a beautiful finish.

As with all of our Chess sets, the Herman Steiner Commemorative Series exemplifies a perfect combination of distinct beauty and functionality. It has been designed to withstand the rigors of practical play while maintaining an elegance which has become the hallmark of a House of Staunton chess set. The design, quality and craftsmanship of this set is UNMATCHED by any set of Chessmen in its price range. Nothing even comes close!

Included with your purchase of the Herman Steiner Staunton Chessmen is a limited Edition hard-bound copy of The Herman Steiner Legacy by Bruce Munson and Frank Camaratta. This treatise chronicles the life of Herman Steiner, his early days, his life as a professional chessplayer, his Hollywood connections, his Chess Club and the Hollywood Chess Scene and his entrepreneurial adventures. The book also provides insights into the design of the Herman Steiner chessmen, the tournaments in which they were used, along with his other chessic innovations - his chess clock and chess table. This work is infused with copious high quality photographs of the Steiner chessmen in play with many of the famous chess and Hollywood personalities from the glory days of Alekhine and Capablanca. The book concludes with an annotated selection of Steiner’s games against the World’s best. 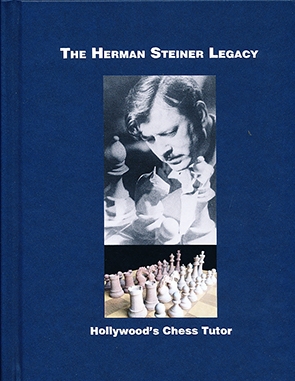 2016 marks the 50th anniversary of the Second Piatigorsky Cup tournament. It is no coincidence that the beautiful Limited Edition set you see before you is a tribute to the man responsible for the famous Piatigorsky Cup Tournaments, Herman Steiner. There can be no doubt that were Herman alive today he would have jumped at the opportunity to see his set remastered to the degree of precision embodied in this official House of Staunton Limited Edition Signature set. For many, looking at this elegant chess set will instill a sense of déjà vu. It’s the knights that grab you. You’ve seen them before—you’re sure if it—but you’re not quite sure where or when. Was it at a tournament? An old photo? Perhaps. Was it something with Fischer? Maybe. Whatever the case you know there is something special about it . . . some historical significance. And you would be right! The set has a strong pedigree with a storied history. It was designed by the enterprising Hungarian-American International Master Herman Steiner, near the end of World War II in Los Angeles 1945. Steiner’s association with Jacqueline Piatigorsky was a relationship of special importance to American chess history. As it turns out, it was also a relationship that catapulted Steiner’s chess set design into immortality. Jacqueline took over Herman’s Hollywood Chess Group after his sudden death from a heart attack in November 1955, re-christening it the ‘Herman Steiner Chess Club’ in his honor. She also carried on Steiner’s legacy of promoting international chess events. It was always Herman’s goal to host an epic international tournament rivaling the legendary New York International of 1924. It is hardly surprising, given his special relationship with the Piatiogorskys, that the Piatigorsky Cup tournaments of 1963 and 1966, as well as and the 1961 Fischer-Reshevsky match, had Herman Steiner written into their DNA - right down to the Herman Steiner Master Chess Sets! One notable feature of Steiner’s pieces was their size. With 5-inch kings they were about a half-inch taller than other luxury sets, something that provided a stunning presence without being gaudy or obtrusive to game play. It is unclear how many sets were actually produced. The bulk of production work occurred between late 1946 to early 1947, with the first finished sets publicly displayed in the Spring of 1947 at Steiner’s club. The first documented appearance of the set in the photographic record occurred in June 1947 with Steiner’s match against California master Harry Borochow. It is estimated that fewer than a hundred sets were ever completed, No more sets were ever made by family or anyone else.